Britannia Avenue is a tribute to the connection that Selkirk residents felt toward the British monarchy. The avenue was likely named at the start of World War I when British patriotism was at its peak in the town.  British jingoism was at its height between the Boer War and the beginning of WWI.  Songs such as The Maple Leaf Forever, the unofficial national anthem and Rule Britannia were popular songs of the era.  Every town council meeting began with a prayer and a toast to the Queen or finished with the song God Save Our Queen.

Selkirk and the Great War

Shortly before the grand opening of Manitoba Rolling Mills in Selkirk, Britain officially declared war on Germany on August 4, 1914. Two days later, the Canadian Military made a call for volunteers, and the young men and women of Selkirk rushed to sign up. The next day, Manitoba Rolling Mills was forced to lay off its construction workers and the promising industrial development of Selkirk came to a sudden halt.

In 1915, a local battalion, the 108th, was formed under the command of Lieutenant-Colonel G.H. Bradbury. The soldiers were stationed at W.L. Parish’s Red Feather Farm near Eveline Street. The battalion took the symbol of a rooster for its badge. When the soldiers were sent overseas in September, 1916, they served with many other units.

At battles such as Vimy, Paschendale and 2nd battle of the Somme, Selkirk’s sons distinguished themselves.  In April of 1917 alone, 27 members of the 108th battalion were wounded. By the end of the war, 156 local soldiers were dead. Their names appear on the memorial in Veteran’s Park.

When the Armistice was declared on November 11, 1918, Selkirk residents prepared for a celebratory parade, but their plans were cut short by the Spanish Flu. Public gatherings were banned and Selkirk became a quarantined town for two months.  The parade was finally held in 1919. 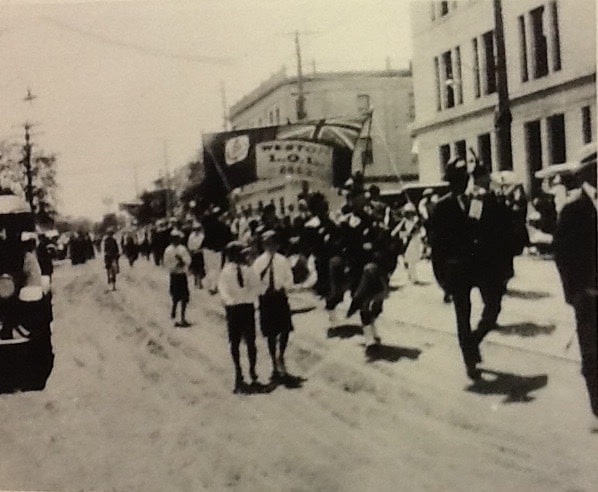