The Origins of the Bizarre Horn Chair

This peculiar chair found tucked away in the City of Selkirk council chambers has been an oddity for passersby to gawk at for many years. Staff and council have no idea how long it’s been sitting there and had little context behind its significance. Accompanying the chair has a note that reads “Horn Chair – Left to the town by George Dickenson who owns one of the two livery stables in Selkirk, across from the Legion.”

According to the entry on George Dickenson in the booklet Selkirk’s 75th Anniversary: “One of the concrete memorials to Mr. Dickinson’s memory still remains: a horn chair made under his direction by one Mr. Graves and which still exists in Winnipeg today.” Could this be that “horn” chair? If so, the book was written in 1957 which was 27 years after George’s death and six years after that of his wife, Jessie. Presumably, it was left to one of their seven children, however there is no newspaper mention of it being donated to the city. The sign suggests that the chair was donated directly by George Dickenson. If that is the case, it would have been prior to his death in 1930. Dickenson is likely the man who harvested the antlers as he was an avid hunter as can be seen in the accompanying photo of him in 1906 with a moose – perhaps the one who contributed antlers for the chair?! 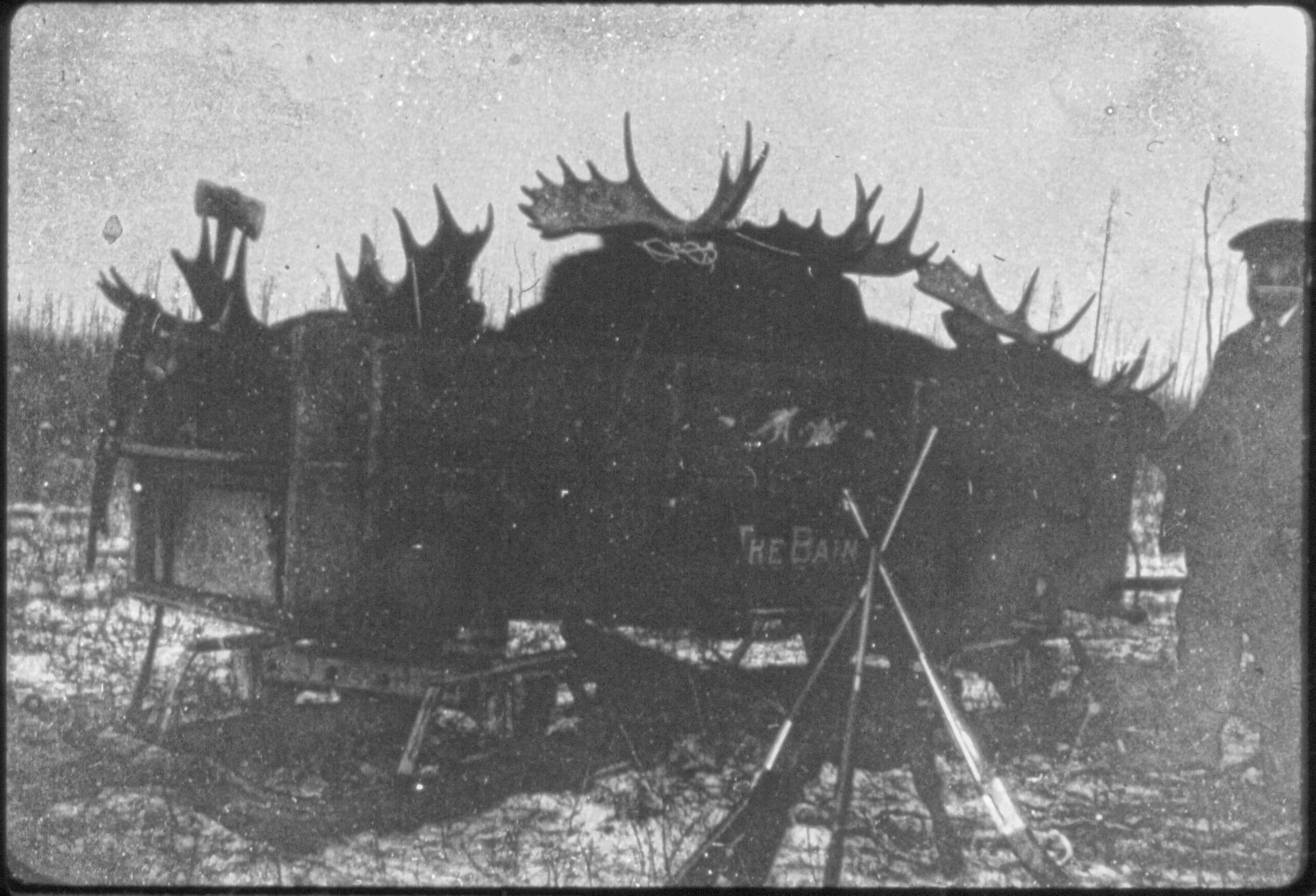 George Stanley Dickenson was born December 30, 1860 in New Brunswick and came to Manitoba at the age of sixteen with his family. He worked for the CPR building new lines and on the first government dredge of Lake Winnipeg before settling in Selkirk 1881 and taking a job with the Northwest Lumber Company.

On July 7, 1892, George married Jessie Galloway, a seamstress and dress designer from Selkirk. The couple would go on to have five children: daughters Vivian, Lyall, Dorothy, Marvel and Winnifred, and sons Lester and Burnet.

The Winnipeg Tribune reported in November 1892 that F. W. Colecleugh sold a lot at the corner of Eveline Street and Manitoba Avenue to Dickenson for $1,000. That is where he established his livery and feed business. He also took over the livery business of Lee Mills on Manitoba Avenue in 1899.

Aside from tending horses, Dickenson also provided freight and stagecoach service in the region. Various newspapers mention through the late 1890s to the early 1900s note that he had the contract to deliver mail between Selkirk, East Selkirk and Peguis. He advertised stage service between Winnipeg and Selkirk, from East Selkirk to West Selkirk, and between Winnipeg and Riverton. Service was normally year-round using covered, heated coaches on skis in the winter. For a time starting in 1897 Dickenson was a Massey Harris agent which required a large extension to his stables. Tragedy struck the company in January 1895 when one of its teams and drivers, Mr. Eggertsson from the Gimli area, went through the ice and drowned in the Icelandic River while hauling ore back to Selkirk.

1903 was a busy year for Dickinson and his business. He had a two-storey feed and livery stable built at Winnipeg Beach to provide year-round service to the teams hauling fish from Lake Winnipeg to points south. He also sold his original building to R. C. Moody who converted it into a hardware store, (which burned down in 1957), and expanded another livery yard on Eveline Street. Dickenson appears to have carried on business in the region from his Eveline Street base well into the 1900s. In 1908, for instance, he provided carriage service from Eveline Street to the new Selkirk General Hospital. That same year he won the award for ‘best team’ in Selkirk’s Dominion Day parade. As there are no scanned archives of Selkirk newspapers from the period it is hard to tell what happened to Dickenson and his business in later years. It did carry on into the 1920s but would have been a smaller entity as much of his cargo and passenger service dried up thanks to advances in the region’s rail and road network. The CPR, which Dickenson once worked for building rail lines, began passenger and freight service to Winnipeg Beach in 1903 and on to Gimli in 1906. In the summer of 1905, the Winnipeg, Selkirk, and Lake Winnipeg Railway introduced passenger and freight train service from Winnipeg to Selkirk via Eveline Street. It was converted to streetcar service in 1908.

By the 1920s motorized vehicles were taking over much of the work that horses did.

The Dickenson’s eventually relocated to Winnipeg. According to Winnipeg’s Henderson Street directories, he and Jessie bought a house at 173 Machray Avenue in the North End around 1926 and his occupation is listed as a dredgeman. (He was around 66 years old by this time.) The following year he is listed as a “provincial government employee.” He finally retired in 1928. George died at their home on March 19, 1930 at the age of 69 after a “protracted illness”. Jessie died May 20, 1951 at the Grace Hospital at the age of 92. Both are buried in the St. Clement’s Anglican Cemetery.