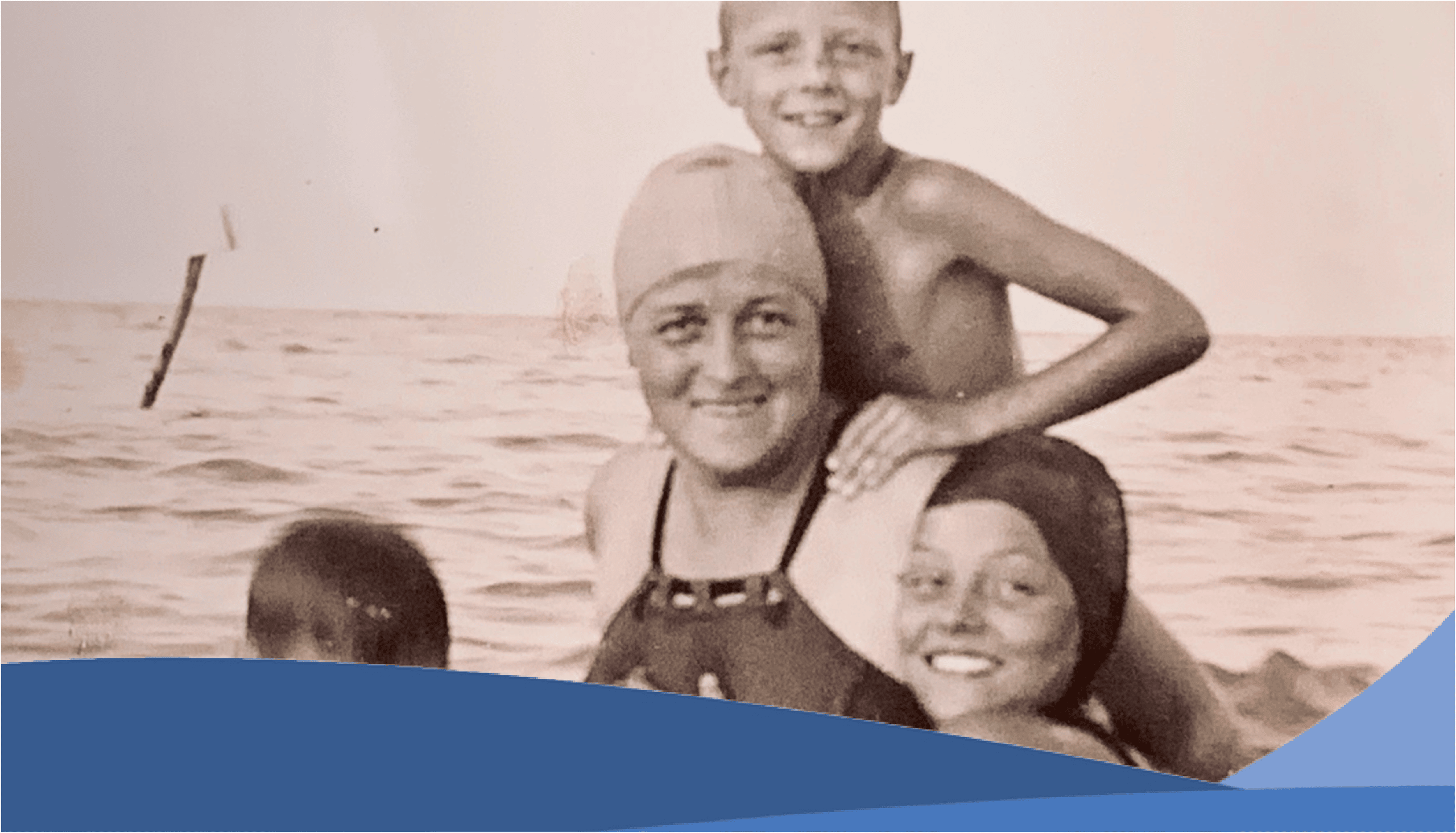 Ruth Hooker was born Ruth Caroline Moody and was the youngest of four.

The Moody home — the big, square, yellow house on North Main Street —was bought by her family in 1900 and it was there that she was born on June 19th of the same year. Mrs. Purvis told her many times that she thought Ruth’s father was awfully old to be having a baby. He was 55 at the time of her birth! Her childhood was as happy as it could’ve possibly been. She was spoiled —— by her older brothers and sister, as well as her adoring parents.

The yellow house was set well back from the street, in a field. There was always a grazing black cow and sometimes there were some frisky horses. It had roses and lilacs in the yard and a swing on a maple tree, a green tennis court and a screened verandah with large vines and tiny windowpanes. Inside the house were two fireplaces; one in the parlour and one directly above it in the master bedroom. Before the days of waterworks, her brother Harry put in a gravity water system, filled by a force pump in the kitchen that had to be pumped for hours and hours.

Ruth’s father was a businessman and in 1903, he bought land and built the Moody block at the corner of Manitoba and Eveline. He opened a hardware store and the Dominion Bank operated out of one of the corner offices. Her father had been a haberdasher in England and met her mother, the daughter of Irish immigrants, when they were in St. Catherine’s, Ontario.

Church attendance and activities were central in their lives. The Moody family attended Knox Church every Sunday until 1925, when they moved to the United Church. The investment in the church led her to become the first female Deaconess of the United Church. Learning and education were ingrained in her and studying Christianity was central to her life. Ruth taught Sunday School to children during her adult life.

Ruth was a young girl when Harry enlisted in the First World War in August of 1914. He went to war with many of our other young men, including the Hooker boys from a few blocks away. Thankfully, Harry came home, but many of the others didn’t. Leon Hooker died at Vimy Ridge, but his brother Gordon came home later than the rest. He’d been in the Fort Garry Horse and stayed in France to settle the horses before returning home.

One of her father’s ambitions was that each member of our family would see the ‘Old Country’, as he called it. Mr. and Mrs. Moody took Ruth to see it in 1922.

When returning home, Ruth was courted by Gordon Hooker, who she later married. They shared a home on the corner of Eveline Street and Morris Avenue. It was a lovely home with three stories that Gordon renovated and reduced to a two-storey. While he continued to operate the Family Lumberyard next door, Ruth pursued her interest in family, children, and community.

When Ruth married Gordon, she had to cease her duties as a Deaconess of the church but continued to teach Sunday School. Mr. Moody had been on the school board in Selkirk, so she followed his lead. Through her work with the school board, she was able to help children and the community.

Ruth was a teetotaller (for young folk, it means she didn’t drink alcohol) and wouldn’t allow spirits in her home. Gordon was happy to comply. He did, however, donate the south bit of their property that was the tennis courts to the Canadian Legion so that he and his brothers in arms could meet to tell stories, mourn those they lost, and enjoy an after-work drink.

Gordon and Ruth became parents in 1922 with the birth of their daughter, Helen Ruth, followed son Frank in 1926 and then Richard in 1928. Those were joyous times but were countered when she found out she had Type 1 diabetes. But Drs Banning and Best gave her the opportunity to watch her children grow and savour every moment of life. Ruth went shooting with her husband, and swimming with her children at the family cottage in Matlock. It was beautiful — right at the corner of Bubbling Well Road and the Gimli Trail. The days at the cottage were full of laughter and fun.

Those were the best days of her life. She went on to watch her own children grow and flourish and as she lived through another World War, she saw other children suffering. In the aftermath of the Second World War, with the love and support of her husband, Ruth fostered 37 children around the world to try and make their lives better. One Christmas, the Winnipeg Tribune even wrote a full-page article on Ruth and the children she supported around the world. When the old Victoria School (which was her children’s old school) was being torn down and replaced, she felt that more property was needed to build a playground. So, she donated some land to help provide that.

In the last years of her life, Ruth worked with Elsie McKay to create a booklet commemorating Selkirk’s 75th anniversary. Ruth even cajoled Harry into writing an article in Bungy, the local dialect. Writing was a passion of hers, and the beautiful typewriter Gordon gave her held pride of place in the home office. Ruth spent many hours writing the stories of Selkirk life as it came to be. She loved her hometown but mostly, she loves the people in it.

Ruth passed away in 1957 and her daughter-in-law, also Ruth Hooker, says it was the saddest thing she’d ever seen when she walked into the St. Clements graveyard. The Hooker plot is right outside the doors, and people lined both sides of the walkway leading up to her grave. She was only 57, and had so much more left to give, Diabetes wore her out and is eventually what took her, but Ruth’s memory and the legacy she left on Selkirk lives on. When children play on the playground of Ruth Hooker school, it’s because she cared. Ruth didn’t know what ended up happening to the 37 children she sponsored but hoped they’re out living better lives. Ruth’s family still lives in Selkirk, and some are now spread out across Canada and the USA.