Robinson Avenue is named for Captain William Robinson, a man of many talents who grew rich in shipping, timber and fishing.

Robinson’s fleet of fishing boats and tugs, fishing and timber camps provided 1000 jobs to the people of the region every year. His enterprises provided timber and fish for processing in Selkirk’s first factories and mills.

He owned several warehouses on the waterfront and a general store along Eveline. His large lumber yard was on the north side of Robinson Avenue near Main.

In 1884, Captain Robinson was asked by the Governor-General to arrange the outfitting and recruitment of the brigade of “Nile Boatmen”. These former York boatmen were sent from the Red River area to assist the British Army in Egypt.  They were trying to rescue British troops trapped in Khartoum.  Though the mission failed, Robinson became a national hero.

The next year, he provided the steamship “Northcote” and its crew for the Canadian Army’s attack on Batoche that ended the North West Rebellion.

Robinson was also a keen supporter of Selkirk.  He became Selkirk’s first great philanthropist. In the early 1900’s, he organized drives to provide sewer and water services to the town.  He also helped Selkirk set up its first fire department, its first hospital and the Carnegie Library.  Robinson also donated land for the road leading to the first hospital in Selkirk.  Idell Avenue is named for Robinson’s beloved daughter. Does Selkirk have its heroes? This is one!

Steamboats on the Red

At Robinson and Eveline, one can see the Marine Museum – a unique feature in Western Canada.  This museum celebrates life on the water and the accomplishments of mariners, fishermen and boat-builders a thousand kilometers from the nearest ocean.

Since its founding, Selkirk has been a key port on the Red River-Lake Winnipeg transportation system. James Colcleugh received assistance from A.G.B. Bannatyne to build Selkirk’s first docks on the Selkirk inlet in 1876.  This allowed steamships and schooners to load and unload cargoes safely at Selkirk.

Within a few years, steamboats were built and launched here to haul supplies and passengers to the far reaches of Lake Winnipeg and the Saskatchewan River.  Steamboats transported fish and timber from Lake Winnipeg to processors dockside in Selkirk. After 1883, railway locomotives carried the products to markets nation-wide.

Selkirk prospered by processing the raw materials (mainly fish and logs) and by providing services to the trains, ships, their crews and the communities along on the lake. 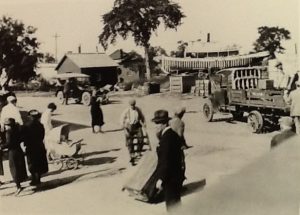