You are here:
Places

The Rotary Club of Selkirk has been a driving force in the community since it received its charter in 1937. Its best-known contribution is the Selkirk Park Pool (Rotary Lake) in Selkirk Park.

When the club did a door-to-door canvas to raise funds for Memorial Hall in 1946, they also asked residents about other amenities they’d like to see. Most residents agreed on a swimming pool, and the club decided that that would be their next big project. They sent a delegation on fact-finding missions to Pine Falls, Portage la Prairie, and Emerson, where pools had recently been constructed.

By 1953, the Rotary Club had $7,600 out of what was expected to be an $18,000 pool in the bank. The club formally approached the town about the plans and got an agreement in principle from the Parks Board. This agreement stated that the exact location of the amenity built on park land would be determined later. Mayor Steve Oliver openly endorsed the project, stating:

“The outdoor swimming pool, which has been proposed by the Rotary Club, is in my opinion one of the most needed and worthwhile projects ever undertaken in the Town of Selkirk.

With a few more months of fundraising under its belt, the Rotary Club met with the Parks Board in January 1954 to discuss the specifics of land requirements. The club had its eyes on the site of the former community hall on Eveline Street, which had been demolished in the spring of 1952. The area became known as “the bowling green”, as the green space next to the hall had survived the demolition.

A Loss of Momentum

Afterwards, news about the pool project fell silent for a few years.

This was partly due to the removal of the bowling green as a potential location. In 1954, the local Legion and ANAVETS approached the Parks Board to ask for the site — which was adjacent to the town’s cenotaph — not to be developed, as it had become a popular place for seniors to sit and stroll. The board agreed, and the land became part of what is now Veterans Memorial Gardens.

The pool project was also hit hard by inflation. The post-war construction boom continually drove up the price of labour and materials, and the original $18,000 estimated cost of construction had nearly tripled.

By spring of 1957, a location for the pool still hadn’t been nailed down. In March, the town supervisor told the Rotary Club that a location across from the new arena on the west side of Jemima Street was likely going to be approved by council.

Perhaps unhappy with the choice of the Jemima Street location and the cost associated with it, a delegation from the Rotary Club attended the September 10 meeting of the town council to ask their opinion on building the pool in Selkirk Park. The idea was immediately endorsed and sent back to the Parks Board to act.

Selkirk Park was once the jewel in Selkirk’s parks system boasting many amenities, including a pavilion and a streetcar link to Winnipeg. Unfortunately, the pavilion burned down in 1936 and the streetcar service was terminated the following year. Through the war years, the park was left to decline. After the Red River Flood of 1950 washed away most of the remaining buildings, the park was left strewn with tonnes and tonnes of debris.

Cliff Morrison, a town councillor and member of the Parks Board, made it his mission to bring Selkirk Park back to its former glory. Over time, the park was cleaned up and in 1954, it became the home of the Selkirk Regatta. The Selkirk Regatta required new roads, washrooms, and concession stands to be re-established.

The swimming pool would be the central attraction of the newly rejuvenated park and plans were redrawn so that instead of a traditional concrete pool, it would be a 76-metre by 122-metre (250 ft by 400 ft) man-made lake encircled by a sandy beach with a capacity of about 6,000 people.

Shaped like a giant saucer, the deepest point at the middle of the lake was about 2 metres (7 feet), and a diving tower was set to be installed. The lake would be continuously fed from an 80-metre (265 ft) deep well. The overflow would drain into the Red River.

The change in design meant that the cost estimate for the pool (which reached around $75,000 at its highest) was brought back down to around $20,000. Once amenities like a concession stand, a picnic area, change rooms, and washrooms were added, the final bill was about $35,000. Income to help maintain the pool and park was generated by leasing out the concession stand and by a 50-cent per vehicle daily parking fee.

Approved September 10, 1957, construction began shortly after on October 1 of the same year. By June of 1958, the finishing touches were being put on the changing rooms.

The water for the central geyser that fed the lake was activated following the Selkirk Regatta on July 1, 1958. Selkirk Rotary Club president Bill Patterson did the honours and was joined by Mayor Ben Massey, city engineer Blake Moffatt, and chairman of the Rotary Lake Project Sid Sarbit. Before the lake was even filled, excited bystanders ran in and began splashing around. Lynne Oliver and Lucy Huggard are credited by the Selkirk Enterprise as being the first to take a dip.

The official opening of the pool was planned for Monday, July 14, 1958, but was moved up to Rotary Day on Monday, August 4. During the opening ceremonies, the new Rotary Club president George Sigurdson presented the mayor with a copper plaque commemorating the handing over of the lake from the Rotary Club to the town. Together, Sigurdson and Mayor Massey cut the ribbon. 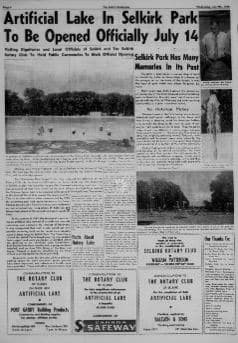 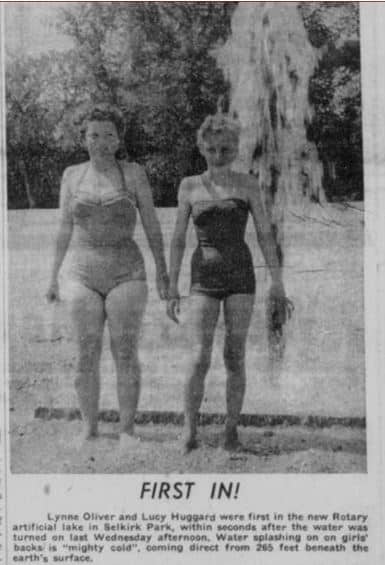 In the spring of 1960, the lake faced a significant setback. Ice jams and flooding from the Red River caused extensive damage to Selkirk Park. At the pool, the main boathouse was spared but the concession stand and other buildings were destroyed. The cost of the damaged was around $10,000.

Each municipality in Manitoba was asked to submit at least one project for funding. The Town of Selkirk and the Rural Municipalities of St. Clements and St. Andrews formed a single Centennial Projects Committee and submitted a joint bid to make extensive improvements to Selkirk Park.

The town concentrated on major upgrades to the lake, including a new filtration system, drainage system, a concrete bottom, and deck areas to create a more traditional pool style. 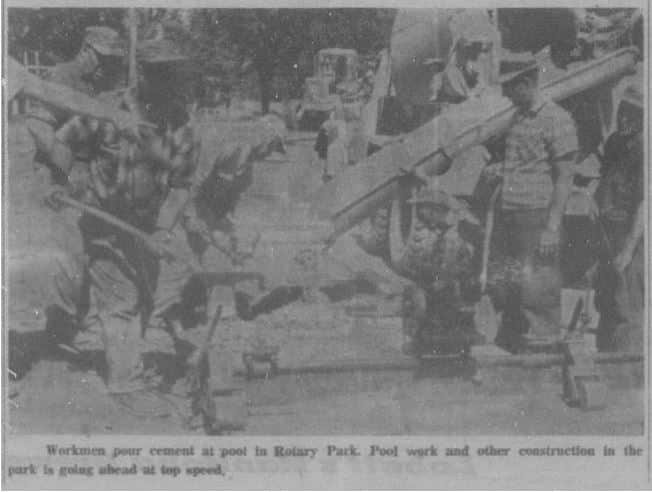 Reconstruction of the pool took place in the summer of 1966 and was open in time for swimming lessons by mid-July. All of the parks new improvements, which included a campground and fair grounds, were officially opened on July 1, 1967.