You are here:
Parks

The site of Veterans Memorial Gardens played an important role in the community long before the erection of the war memorial in 1927.

This site was home to Manitoba’s first national fish hatchery, which was built in 1892 by the federal government. It was described in the department of fisheries’ 1893 annual report as “probably the largest fish hatchery yet built in the dominion.”. The site featured a 100 foot by 40-foot hatchery building and a separate residence for the manager and his family.

The facility closed in 1917 after the establishment of newer hatcheries further north.

By 1920, the building had been converted into Selkirk’s Community Hall. It served as the town’s main meeting place and hosted countless receptions, ceremonies, political rallies, recitals, and concerts. It was also home to the Selkirk Sea Cadets and the Selkirk Badminton Club, which played in the large hall in winter and on the expansive grounds in the summer.

It was during this time that the site also became home to the Selkirk and District war memorial – but it wasn’t the organizers’ first choice.

In August 1926, a group of citizens established the Selkirk and District War Memorial Association at a meeting in Lutheran Hall. Their first order of business was to find an appropriate location.

According to the Selkirk Weekly Record of August 19, 1926, “The site chosen was the property opposite Knox Church, situated on the banks of the river, affording a splendid view and the beautiful trees that line the eastern bank. An ideal location for meditation on those who gave their all for freedom.”.

It turned out that the land in question was owned by the street railway company, which said it had plans to use it in the future. The committee then appeared before the city council to request that the space adjacent to the community hall — where the hatchery manager’s residence once stood — be granted to them. The city agreed.

The committee then chose a design for the monument which was described as ‘unpretentious but artistic and appropriate for the setting’. The public was invited to see a drawing of it in the window of Gilluly’s Drug Store. The artist or firm that created the monument is unknown.

A $3,500 fundraising drive was launched in November 1926. It collected money through direct donations, fundraising booths at fairs, and special events such as dances. By June 1927, the group had raised more than $2,000 which was enough to place an order for the monument.

Once the monument was ordered, the city agreed to take over the future management and maintenance of the grounds while the committee busied itself collecting the 250 or so names that would appear on the bronze plaques. This was done through a combination of public appeals and scouring old war records.

The committee had already enlisted the help of Frederick W Broderick, a landscape architect and professor at the Manitoba Agricultural College, to design the layout of the grounds. Though his final plan (which called for gardens, walking paths, and a stand of elm trees) was not approved until after the monument was unveiled, it became clear that the narrow strip of land the committee had at their disposal was not going to be sufficient.

In October 1927, the committee appeared again before the council to ask that an additional strip of land 28 feet in width be provided for the memorial grounds. They were successful.

The Honourable Theodore Arthur Burrows, Manitoba’s Lieutenant Governor, performed the official unveiling of the monument on November 11, 1927. General Huntley Ketchen gave the main address in which he reminded the crowd why the monument was erected, “The men who returned and are here today will hear me out when I say that our best we were forced to leave behind us in the many cemeteries over yonder”. District Girl Guides and Boy Scouts acted as Guard of Honour for the Veterans who gathered for the ceremony.

The stone monument is inscribed: “A memorial to the men of Selkirk, St. Andrews and St. Clements who fell in the Great War. Know all ye who pass by that for your tomorrow we gave out today.” The names of the dead are displayed on seven bronze plaques.

Selkirk’s community hall, which stood adjacent to the monument, was condemned in 1951 and torn down in the spring of 1952 after the city’s new Memorial Hall opened. The only remnant of the facility that remained was a bowling green. 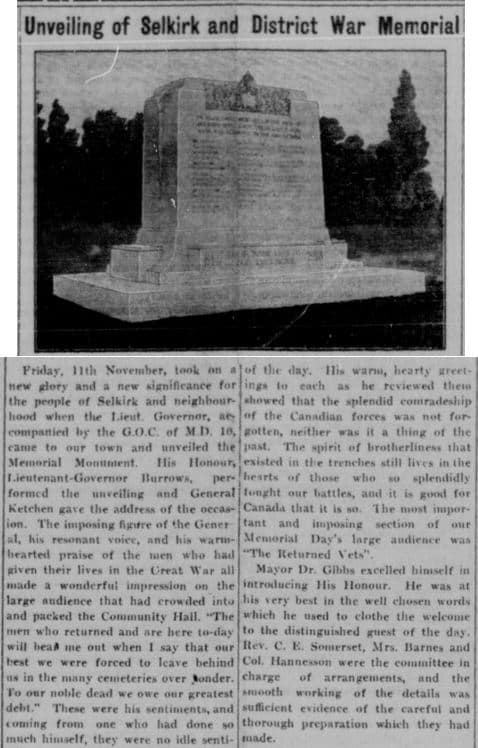 A Battle for the Land

There was a great deal of interest in this prime piece of real estate. The Rotary Club wanted it for a swimming pool and numerous developers expressed an interest in building housing on it. The bowling green, however, had been placed under the administration of the city’s newly created parks board which reminded council on numerous occasions that it would make the decision on its fate.

The local branches of the Royal Canadian Legion and ANAVETS appeared before council on October 25, 1954 to request that the land not be sold off for development as it was enjoyed by so many seniors. L. G. Howard, part of the Legion delegation and a former chair of the monument committee, told council, “This is one of the finest views in Manitoba…. We are not in such financial straits that the sale of this property is necessary….A progressive community is most often judged by its parks and beauty spots.”.

After the public appeal by the veteran’s organizations, the parks board decided that the old community hall site would become part of the memorial’s greenspace.

In the summer of 1956, redevelopment of the site got underway. The bowling green and some of the old walking paths were torn up and new paths, gardens and trees were added.

In 1959, the monument was expanded by adding a new stone to its centre so that the names of those who died in the Second World War and Korea could be added. The monument was rededicated on Decoration Day, June 28. 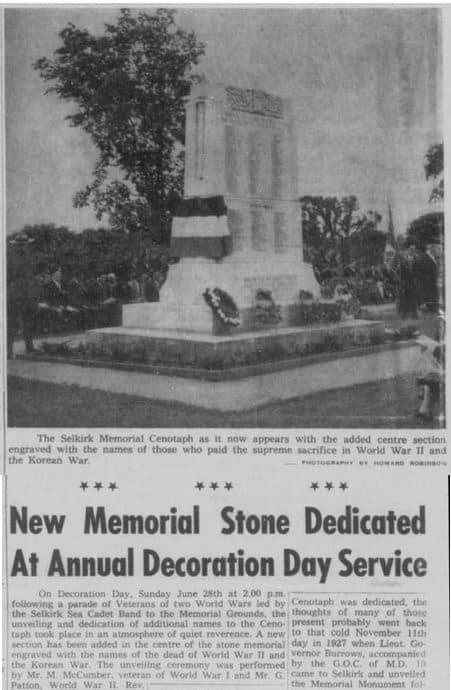