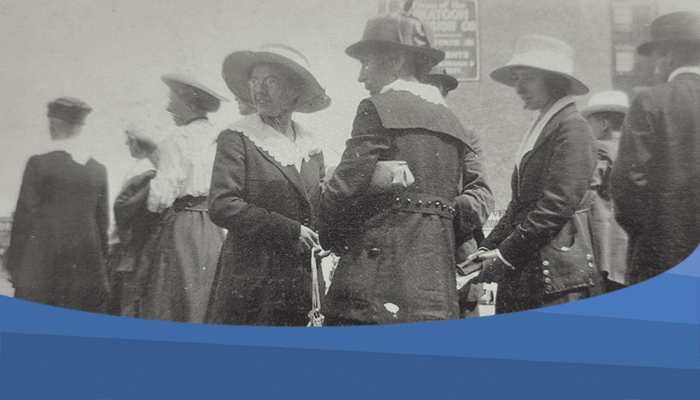 European women in Manitoba won the right to vote on January 28, 1916. This, of course, did not come easily. One woman who not only advocated for women’s rights but also human rights amongst other things was Margret Benedictsson. She was born in Northern Iceland to Jon Jonsson and Margret Jonsson. After her mother’s death she was put in foster care for two years until her father could care for her again. In 1887 she had borrowed enough money to sail to North America to attend school where she influenced classmates to use their voices for women’s rights.

She promoted education for young women and organized suffragist societies in Winnipeg, Selkirk, and Gimli. She founded the first Icelandic Suffrage Society in North America which she also became the president. From 1898 to 1910 she and her husband ran a publishing company in Selkirk which became widely popular. They printed a journal which was also very successful called Freyja which was read by both men and women. She wrote to many types of women including those who had no choice but to have children. She  told them to withhold sexual relations so their husbands would vote for political candidates who supported women in the right to vote.

In Iceland women had the right to vote in church elections. Since 1882 single women and widows were able to vote at a municipal level. Being a mother herself she would take care of her children during the day and lecture to the Winnipeg Icelandic community during the night. She created petitions to the government which called for women to be viewed as equal no matter their marital status and property holdings.

Once women won the right to vote in 1916, she faded into the background. She divorced in 1913 from her husband and due to her age, she began to lose her sight. She moved to the west coast to be with her family. Even though she could not be at the Manitoba Parliament Building for the third reading of the bill, acting premier and Attorney General Thomas H. Josdottir made sure that Benedictsson was not forgotten about. His own mother had fought hard alongside Benedictsson. He did not want anyone to forget one of the important women who made it possible for women in Manitoba to vote.

Margret Benedictsson fought for women everywhere. But it is important to note that she fought for the rights of European women. Indigenous women in Manitoba were not allowed to vote until 1952. Unfortunately in some places around the world women are still fighting for basic rights. Never be silent when you know something is not right. Celebrate the women in your life.

Read more about women in Selkirk

“Give Us Our Due! How Manitoba Women Won the Vote” – Manitoba Historical Society