Superior Avenue points eastward to Lake Superior from where the rail line from Eastern Canada was inching its way west in 1875.

The next step would be the building of the rail bridge across the Red River!  Selkirk would become “the new Chicago”- the transportation hub of Western Canada (see map of proposed railway 1882).

In 1878 and 79, the future could not have been brighter for the investors who held lots on Selkirk’s still empty streets. The village of less than 200 people became 400 almost overnight! Land prices skyrocketed! Investors were elated! Dreams of fabulous wealth danced in their heads!

Superior can be partnered with Pacific Avenue.  One points the route to the east, the other looks west to the Pacific Ocean. Both avenues are products of Selkirk’s dream of becoming the rail centre and economic capital of the West. If only the Railway had crossed the river here rather than in Winnipeg, the whole history of Manitoba would have been different.

No costly floods, No expensive floodway, No Winnipeg Jets – the Selkirk Jets perhaps? That would be Superior! 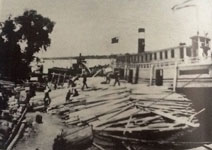 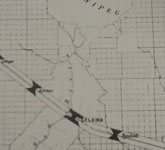